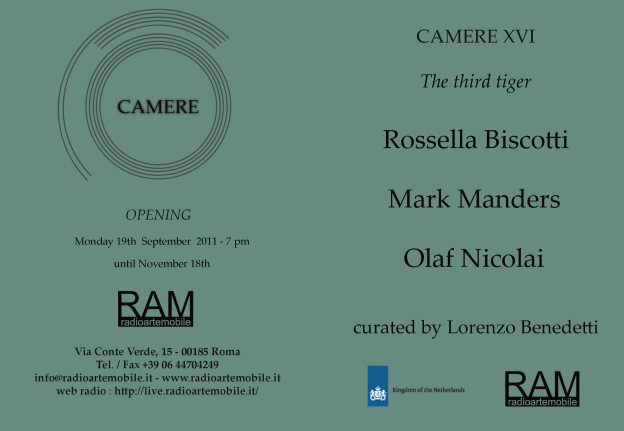 Identity, space, estrangement and memory. We slide and in falling we find equilibrium in the 16th edition of Camere. Once more on this occasion the RAM spaces lay testimony to an entirely special dimension in which the works of the invited artists are inserted.

Mark Manders presents Clay Figure with Iron Chair. A sculpture, only apparently made of clay, lays in a chair. Manders’s language, dedicated to disturbing and destabilizing elements, suggests the impression of witnessing something frozen in that precise moment. The newspapers covering the windows are a creation of the artist (Window with Fake Newspapers, sheets of newspapers composed of nonsensical English words) and only accentuate the desire to not give any temporal reference.

Olaf Nicolai in this exhibition proposes Camera (After Poussin). His work has always been focused on the mechanisms of the artistic and aesthetic process, bringing together art, memory and research with the analysis and review of scenes from everyday life and the transformation of consumer goods. Developing a vast series of interdisciplinary projects, it is difficult to classify his production into a precise category, nevertheless an interest in what art wishes to express and the media used to do so are at the base of his research.

The third room in this Roman space emanates a bright yellow light originating from a projection of the video Yellow Film by Rossella Biscotti. With her work on the recuperation of historical memory, the artist searches, within the words of patients at the end of the 80s under the effects of the powerful barbiturate Pentothal, for fragments of a disappearing experience. The artist chases what has fallen into oblivion, infiltrating the cracks. She recuperates it and transforms it. So that we may not forget.

During the opening of the exhibition, the poet Marije Langelaar will read a selection of poems in a clear dialogue with Manders’s works: a direct link between the hidden identity of the latter’s sculpture and a revealed identity in Langelaar’s words.

The critical text of the exhibition the Third Tiger is by Lorenzo Benedetti, Director of the Stichting Beeldende Kunst Middelburg De Vleeshal di Middelburg (NL).

Rossella Biscotti was born in 1978 in Molfetta (BA). She lives and works in Amsterdam.

Mark Manders was born in 1968 in Volkel, Holland. He lives and works in Ronse, Belgium.

Olaf Nicolai was born in 1962 in Halle an der Saale, Germany. He lives and works in Berlin.

Marije Langelaar was born in 1978 in Goes, Holland. She lives and works in Ronse, Belgium.

The Royal Netherlands Embassy in Rome

The EIGEN+ART Gallery in Berlin