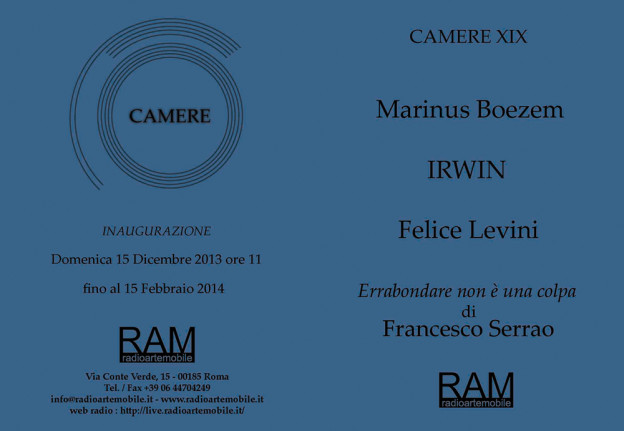 Wandering is not a crime
by Francesco Serrao

In the flow of the sea and time (as Francesco Serrao writes in his text) wind the works present in RAM’s Camere: physical dimension and temporal dimension intertwine to give body to the pages of what appears to be a logbook.

The three rooms, like stops on a long journey, become a meeting place and a new starting point for Marinus Boezem, IRWIN and Felice Levini who here show suggestive routes.

Marinus Boezem presents two pieces: Cartography 1572-1997 is a project composed of 12 old maps of European cities onto which KNMI meteorological maps have been superimposed, indicating as such the average weather of a certain city over a period of 10 years. Each city has its own characteristic climatic condition that influences the colour of the buildings. The artist’s intervention on the maps thus frees the old cities from their historical context. Piss project is a series of photographs taken in the summer of 1969, in which the artist is shown drinking the salt water of the North Sea in Bergen aan Zee and, later, as he releases it in Lake Ijssel. Throughout the journey from the town to the lake the salt water is transformed into matter that could be used or disposed of by his body.

Transnacionala is the video installation IRWIN, based on the analysis that the group, along with other artists, carried out in the course of 1996 during a long trip in the United States (from Atlanta to Seattle). The material recorded, spanning from art to politics and existence itself, in light of the multiple transformations that the culture of today has been going through, is of great relevance.

The room of Felice Levini is immersed in a fluctuating dimension: on the far wall is a projection in which the waves of the sea rock a coffin which, despite the reference to death, gives hope, constituting a raft offering a crossing. In the other corner of the room, time is consumed amid the curls of smoke from a cigarette outlining the contours of the artist’s face.

The text accompanying Camere XIX, Errabondare non è una colpa (Wandering is not a crime) is by Francesco Serrao, who already in 1990 wrote three stories for the exhibition “Lo zingaro blu” (“The Blue Gypsy”) at the Pieroni Gallery in Via Panisperna.