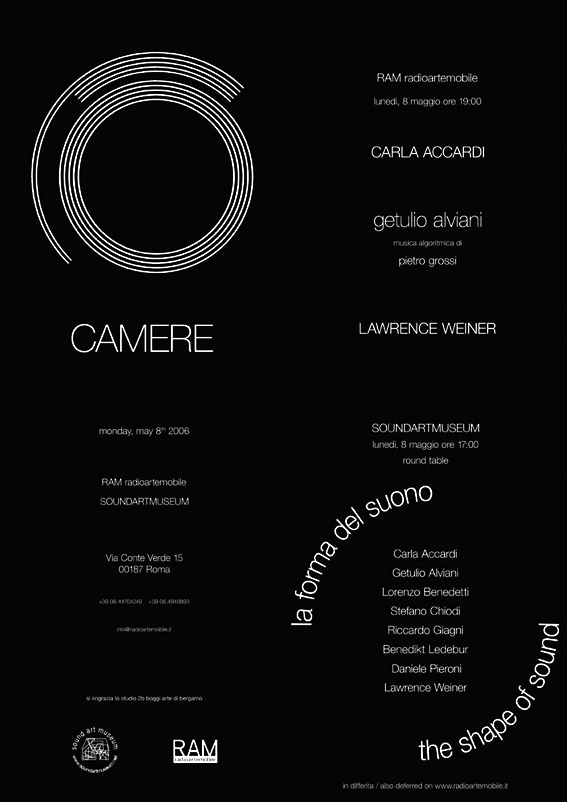 …In this second exhibition of CAMERE, geometry guides the artists in the completion of their work…
getulio alviani makes geometry by questioning light and the vibration it produces in a space occupied by unusually receptive surfaces. He goes on to probe the sound of light with the algorithmic music by Pietro Grossi.
Carla Accardi rides the light waves that pour into the room from her inexhaustible Mediterranean; she lets them settle proudly, with their natural nobility, onto the canvas. In her case, it is the colours that sound the concert, that recount the unparalleled life of an individual who has always been able to express the beauty of the free and rebellious forms of the imagination.
The imperturbable, tenacious words of Lawrence Weiner, appearing unpoetical (and yet geometrical par excellence, as Valéry would say), in their space… (Daniele Pieroni)

… On the occasion of the exhibition will be a round table discussion entitled The Shape of Sound, that wants to open the sonorous to the visual by way of the traditional exhibition space, therefore creating a dialogue with the other works that normally inhabit the spaces made for art. The Shape of Sound is not simply the limits of the exhibition space that hosts the sound works – the limits in which the sound waves break up and delineate the space by giving it a sonorous form – but also the imaginary, immaterial and invisible translation of an entity that normally one constructs with a form…The Shape of Sound wants to be the normal condition of continuity between visual and acoustic art, creating still more an acousmatic dimension. (Lorenzo Benedetti)