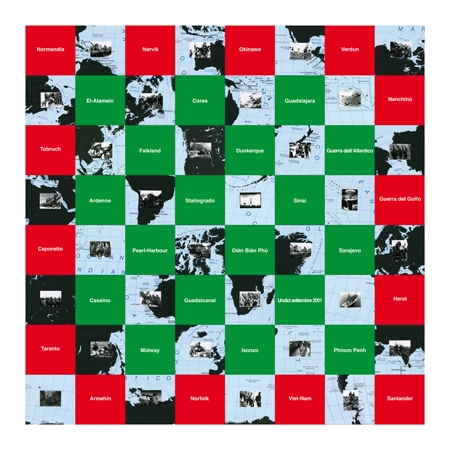 Eleventh event of the One Space / One Sound project

“On ne peut conclure du calme de nos parages à la monotone tranquillité de l’univers.“
(L.A. Blanqui): this is the title chosen for the visual and sound exhibition project by Felice Levini which opens at the Parco della Musica Auditorium on Tuesday the 12th of July, at 7 pm.

The exhibition will be taking place in two stages in the two exhibit spaces. In the first, ‘daytime’ hall, megaphones will be playing a mix of music pieces, sounds, speeches and poetry, creating an interplay of circularity and chaos. This is the hall of the great chessboard, of politics and strategy, of history and its end – of Western collapse, of the last scream, of the heroic act for an unavoidable end, of a babel of democracies…

The next space is the ‘night’ hall – a realm not of darkness but of shadows, its reflection – like the light from a dead star. Everything has already been said and written: the real spur in art lies not in innovation but in reliving the same things – nature, humanity – from other angles, other perspectives. The essence of things lies in the problems posed, not their solutions. Time is punctuated by natural events: the seasons, the months of the year, the movement of the planets, the gifts of the gods, and the mercy of the saints – as though it were impossible to accept the world without the mediation of human hands.

One Space/One Sound is a recurrent exhibition project on the art of sound, conceived by the Musica per Roma Foundation for the AuditoriumArte venue. The project is designed for all installations which have sound as their key component, in terms of their relation to the setting and to visual images, in an effort to overcome the conventional and by now obsolete separation between different artistic disciplines. A defining feature of this art of sound is precisely the intrinsic relation between sound, the experience of vision, and architectural/spatial perception.