From La Montagne de Venise to No Man’s Land 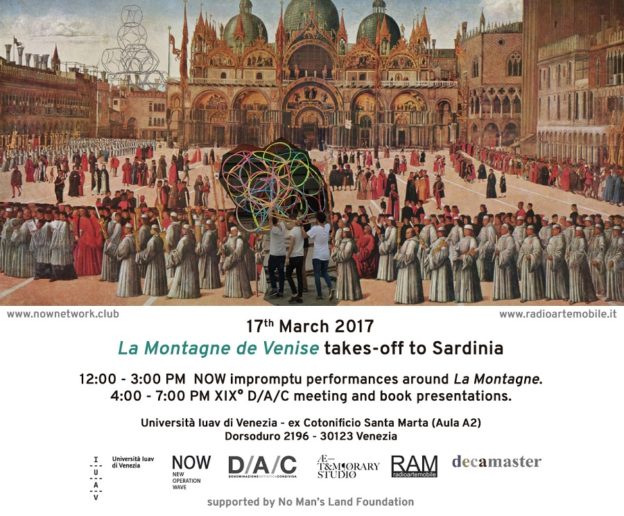 NOW, promoted by Zerynthia, invites you to take part in a journey setting off from La Montagne de Venise in the Venice Lagoon and leading to No Man’s Land in Loreto Aprutino. Both interventions by Yona Friedman with Jean-Baptiste Decavèle, supported by the No Man’s Land Foundation, are connected with the territory through their adaptable nature. They are not defined locations, nor are they pre-established architectural models, but rather they constitute a background for the development of a new vision of architecture.

“On the earth’s surface there are different areas in which the human animal can organize its habitat with diverse means.”

(Y. Friedman, The Architecture of Survival, A Philosophy of Poverty, 2003)

The NOW Check-point is set up as an extemporaneous residency where young architects, artists and curators will be involved in the creation of a choral site-specific project based on the single modules making up the Montagne.

The four days will include discussions and moments of experimentation via simple actions. This platform will allow the possibility to think of the imaginable and improvisable alternatives parallel to the current scenes within the world of art and architecture. On the boundary between the two is born the willingness to create new images, far from the idea of a building or the mere object of a work of art in a world overflowing with constructions.

It is up to our generation the pursue Friedman’s idea of a realizable utopia, developing new visions.
Reinventing the city, parks, districts and ports as places of possibility and of exchange.

16.00 – 19.00 D/A/C meeting at the ex-cotton mill, faculty of Architecture at the IUAV University of Venice, presentation of the book Galleria Pieroni, of the catalogues INSIEME Paths of study between art and territory and Montesilvano oggi.

Saturday 18th March Departure for No Man’s Land with the modules from La Montagne. Arrival at the Limonaia – Terre di Varano and reception of the various participants. Introduction to the residence.

Monday 20th March Discussion in a space provided by the Loreto Aprutino Town Council. Guided tour of Loreto, discovering its most suggestive spots.