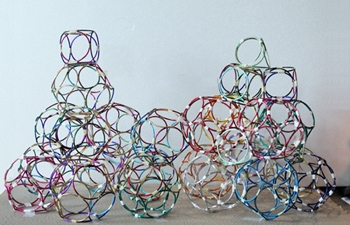 project realized in collaboration with
the Querini Stampalia Foundation, the IUAV University and Fine Arts Academy of Venice

We all know how cities are. They can, eventually, become different. Y.F.

Venice has always had a style of its own, a style which is unique in Europe and which has influenced the Orient. The Mountain is part of an attempt to create a style which is lacking in present day architecture. It is part of a small series which has already been realized (in other parts of the world). I do not know where this will lead but it is worth trying. I believe it could be an opening.Y.F

La Montagne de Venise is the third stage of an architectural itinerary by Yona Friedman with Jean-Baptiste Decavèle in Italy, after the Vigne Museum for the Livio Felluga company in Friuli and No Man’s Land – belonging to everybody – in Loreto Aprutino.

Venice will host an architectural action realized in one of the Arsenal’s hangars, made from a mobile, transformable chestnut wood structure seven metres in height mounted upon a floating jetty reaching from the 28 to the 30 of September various points of the lagoon:Arsenale, Giardini della Biennale, Punta della Dogana, Bacino di San Marco, Zattere, Giudecca, Fondamenta Nove.

The project will be presented by Yona Friedman with Jean-Baptiste Decavèle at the auditorium of the Querini Stampalia Foundation on September 27th at 6 pm.

The itinerary of the Montagne de Venise will be a chance to develop direct participation with the citizenry and its main institutions for an alternative city experience.

The language chosen by Friedman is that of fairy tales which gleans from popular imagination and binds the various Italian projects to date. Venice, with its theatrical, playful and carnivalesque tradition, is in perfect harmony with the project.

“Why not build a mountain in Venice?”: the proposal by Yona Friedman brings together irony and the knowledge that only a participatory architectural action can respond the Venetian dynamics. Building a mountain means changing the landscape, modifying the vision one has of a place, and enables a new point of view of what surrounds us.

On 1st October, for the closing evening, the Montagne de Venise will take on a new form inside the Arsenal.  Art, music and theatre performances will accompany the event.

Afterwards, Friedman’s structure will begin an urban itinerary and will be hosted in the courtyard of the Academy of Fine Arts, the first stop of a course of reconfiguration of the Montagne, at the hands of the students of the Venetian Academy. The Montagne will then move on to other places and institutions of the city.

The project, supported by the Municipality of Venice, is curated by Chiara Bertola and Giuliano Sergio.
Realized in collaboration with the Querini Stampalia Foundation, the IUAV University and Fine Arts Academy of Venice and promoted and coordinated by Zerynthia Contemporary Art Association.

From 22rd September to 1st October, in conjunction with the project La Montagne de Venise, a workshop will be held with students selected from the IUAV University of Venice, as well as students from the Venice Academy of Fine Arts, Conservatorio B. Marcello  the University of Udine and artists in residence in Bevilacqua La Masa Foundation. The seminar will alternate theoretical and practical courses on Friedman’s architectural and urbanistic study and on the specific application planned for the city of Venice. The students will participate in the creation of the Montagne following the experimental modalities of self-building practiced by Yona Friedman.

The Venetian project is part of the programme of events of the serie DELL’IMMATERIALE copromoted by the IUAV University of Venice and the Querini Stampalia Foundation, curated by Chiara Bertola and Renato Bocchi.

On 29th September the event will be illustrated by the curators as part of the international convention  Re-cycle Italy (www.recycleitaly.it) at the IUAV University of Veniceon the occasion of the celebrations for the 90th anniversary of the founding of the college.

On 30th September there will be a round table in Como organized by the Ratti Foundation, with the participation of artists, town planners, businessmen and art critics. This event is part of the programme of D/A/C – Shared Artistic Denomination – proposed by Zerynthia Contemporary Art Association which considers artistic creativity as a catalyst for productive processes and human relations. Friedman and Decavèle got the idea for their Italian itinerary from a D/A/C round table.

NOW  – New Operation Wave,is an international operational network with the aim of amplifying and strengthening communication among young curators/artists/students, supported by Zerynthia. Actively engaged in the project since its beginnings, NOW will document the entire event via sound, video recordings and interviews in order to give resonance on social networks and on web through NOW Radio, the web program created by the group and broadcasted weekly on RAMlive.

Following on from La Montagne de Venise, coming soon will be another project by Friedman with Decavèle in Sardinia, in collaboration with Decamaster/University of Sassari.

Eventi di
ZERYNTHIA
RAM radioartemobile
RAM live
Copyright Zerynthia and RAM radioartemobile 2014 All rights reserved - Web development by Orange Pixel Srl
We use cookies to be sure you get the best experience on our website. If you are going on using this website, we assume you're happy with it.Ok