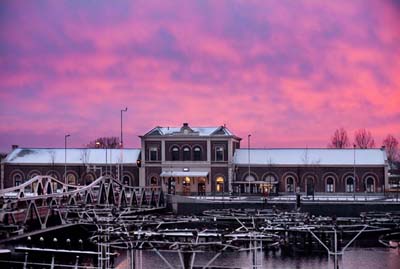 Landscape on the Move

Landscape on the Move is a touring exhibition that brings together elements and testimony from various places, linking the metaphor of travel to that of art. This project, which began with several events in 2010 and 2011, involves a series of contributions by artists who focus on the relationship between artworks and place and treat the exhibition space as a container of ideas in motion. Devised by the RAM radioartemobile organisation in Rome, the project includes an exhibition, the D/A/C project and the SoundArtMuseum.

The artists invited to take part in this Dutch event – H. H. Lim, John Körmeling, Donata Pizzi and Gert Robijns – have submitted works that relate directly to the overall project and establish a link between art and socioeconomic reality.

The Landscape on the Move exhibition will include a debate (at a table designed by John Körmeling) on the D/A/C project, involving artists and entrepreneurs who together seek synergies between creativity and production processes. For this purpose RAM has created and presented the registered brand D/A/C so that the dialogue between the various ways of looking at a product will have a ‘shared artistic designation’ (Denominazione Artistica Condivisa or DAC, echoing Italy’s DOC quality assurance system for wines). The artists taking part in the debate see themselves as ‘idea sponsors’, breaking away from traditional links between art and business and moving beyond the notion of sponsorship as simply a way of boosting corporate image. The added value that artists can bring to companies is their creativity.

Landscape on the Move will also include the SoundArtMuseum (SAM), a project launched in 2005 as a museum of sound and a place where hundreds of sound-art works by contemporary artists are brought together and exhibited. Many of the sound-art installations in the museum are site-specific, including H. H. Lim’s Daily Music, which has been specially created for Middelburg. As part of the exhibition, a series of new works will be presented to the SAM archives, which will be on display in the exhibition space for consultation by the public. Some of the archives can also be found on the Internet at www.radioartemobile.it, under ‘SoundArtMuseum’. The SoundArtMuseum has been assembled by curator Lorenzo Benedetti, composer and musicologist Riccardo Giagni and artist Cesare Pietroiusti.