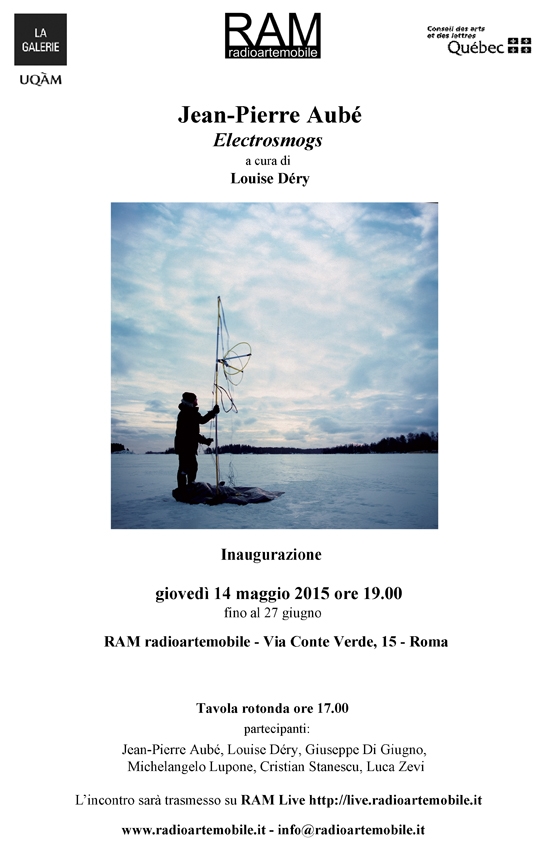 This project is part of Jean-Pierre Aubé’s research on the magnetosphere, a powerful magnetic field surrounding the Earth. In the past couple of years he has explored the invisible change to the planet using instruments of fortune, methods and systems he has developed to make audible and visible the surprising effects of different components of the magnetosphere i.e. Very Low Frequencies (V.L.F.). Certain V.L.F. are produced by natural phenomena such as lightening, the aurora borealis or solar storms. These are called natural radio and are the most difficult to capture because the sky is now invaded by other low telecommunication frequencies used by the police and emergency services. In his series ELECTROSMOG, Jean-Pierre Aubé has examined the activity of the radio frequencies of various large cities in the highest density urban areas. Armed with a radio, antenna and an instrument of his own creation, the artist analyses the spectre of these radio frequencies. This information is then combined with images of the city, digitally modified in the same dimensions, to then create a “sound image” of the space of the city.
After having carried out the project in other cities such as Montreal, San Francisco, Mumbai, Hong-Kong, Istanbul, Berlin, Jean-Pierre Aubé presents his work in Italy at RAM radioartemobile and at the 56th Venice Biennale (6th – 8th May 2015). Jean-Pierre Aubé will link the V.L.F. Natural Radio, recorded from 2000 to 2004 in Finland, Scotland and Quebec, to a collection of graphics, photos and videos from the series Electrosmog. Here in the spaces of RAM the exhibition consists of two new works, Electrosmog Venice and Vatican Radio. The latter will be created from signals taken from the Vatican Radio, one of the most important broadcasters in the world.

The event will be broadcast on the RAM Live web radio