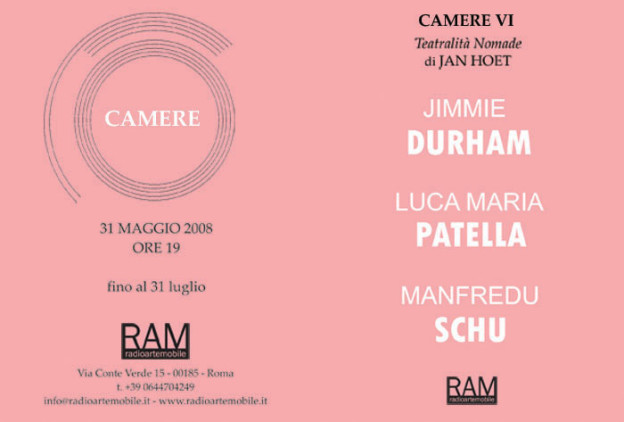 On Saturday 31 May 2008, RAM radioartemobile presents the exhibition CAMERE VI, a new episode of the ongoing “Camere” project, which aims to stimulate fresh modes of communication and communicability of artistic experience through the unprecedented meeting and association of different international artistic outlooks.
The sixth edition of Camere boasts the curatorial contribution of Jan Hoet, Director of MARTa Museum in Herford, Germany, and protagonist of memorable initiatives such as Documenta IX, of which he was Director, and the exhibition “Chambre d’Amis” of 1986, for which he asked seventy residents of the Flemish town of Gand to open up their homes to an art installation, thus dissolving the boundary between art and every-day life.
At this RAM radioartemobile exhibition Jan Hoet has invited three leading figures in the international art scene, Jimmie Durham, Luca Maria Patella and ManfreDu Schu. Each artist will present a new installation that reflects his own aesthetic research and thought.

The art of Jimmie Durham (Arkansas, USA, 1940) draws from Cherokee culture, with which it deconstructs Western culture’s stereotypes and prejudices tied to colonial models. Durham explores the relationship between forms and concepts, including the capacity of words to evoke images in our memory, and the power of images to transmit ideas. In Durham‘s work ideas are stimulated through the juxtaposition and modification of one thing into another. This process generates assemblages, installations, and objects that aim at transcending the purely visible and reaching a conceptual space where meanings continuously shift, as in “Pallas Athena”.

Since the mid-Sixties, Luca Maria Patella (Rome, Italy, 1934) has conducted an analytical exploration of all systems of cognition through a variety of means and languages. His analysis is characterized above all by the psychic, mental, and cultural significance of this approach. In this show he presents “gli ‘Arnolfini-Mazzola’ ri guardano RAM / MAR”, two large canvasses in gold round frames that depict the artist and his wife at Madmountain, their studio-home in Montepulciano. A tautological effect is created in Patella’s work, in which the artist discovers one universe within another.

ManfreDu Schu (Vienna, Austria, 1959) shows “You start your changing…”. His work is rooted in the versatility of the living realm, from which it proceeds towards the creation of new experimental scenarios. The complexity of his research is expressed through a variety of means of presentation: painting, sculpture, sound, installation, actions, performances. In conjunction with his deconstructions, he uses texts, words, and terms in which a strong Dadaistic bent is evident; his works appear as archaic rituals and narratives of the absurd.

In this exhibition, as Jan Hoet writes in the text entitled Teatralità Nomade, we may cite a combination of references whose staging becomes the individual actuality of the artist. And where better than at RAM radioartemobile, where each artist has his own specific and personal space, can this individual dimension be shown to its best advantage? Here the viewer establishes a special rapport with the artist’s individual space and interprets it as the pedestal on which the work rests; he identifies with it in a personal, domestic response, as a direct experience relating to his own space and life.

During the show, RAM radioartemobile recorded a debate with Jan Hoet and the featured artists which is viewable in our archive at www.radioartemobile.it