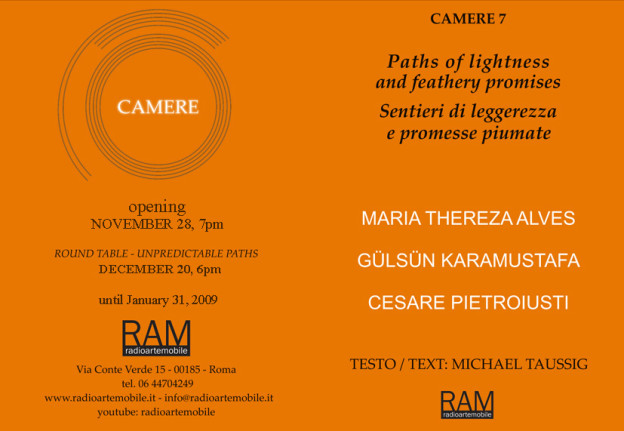 with the text Lightness and Feathery Promises by Michael Taussig

(…) it is rare to hear someone say outright “I promise.” That is the beauty of the promise. It is light and feathery and is shy of being put into words. Kafka would put it like that, I am sure. Maybe people say they promise when they vow something, like getting married or becoming a naturalized citizen. More commonly a person simply says something like, “I will do that.” The promise is implied, not explicit, and when it is explicit it seems almost magical, like a prayer or holy. It invokes other, extra-ordinary, modes of being, so as to ensure our more ordinary modes. That is why it cannot be put into words as in a contract. It invokes the notion that in some fundamental way we owe loyalty to each other, not just to a particular person, but to all God’s creatures whether they be, for example, immigrants or native born Italians. This is why promises are light and feathery—like little angels. Michael Taussig