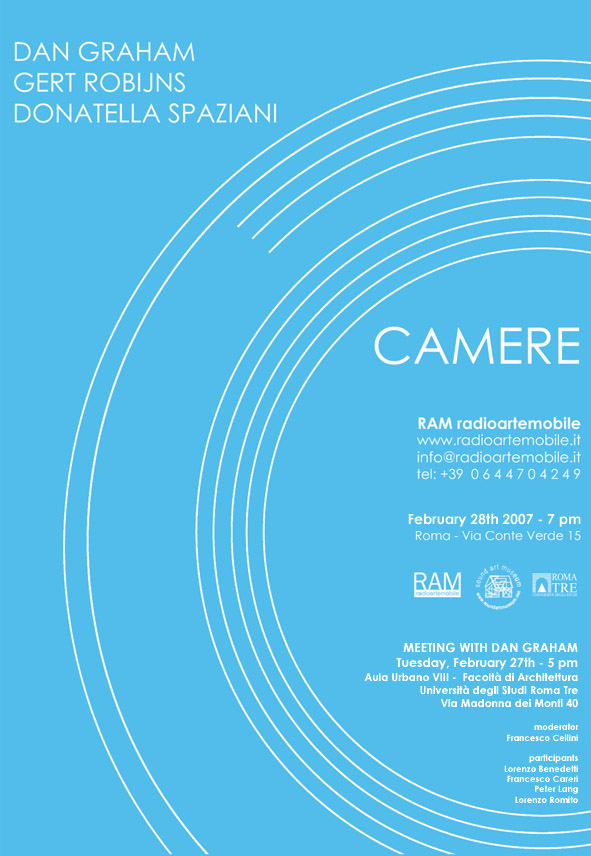 CAMERE III
SPACE AND ITS NEGATIVE, ABSURD AND TWO-DIMENSIONAL VOID

Three artists present a similarity in the investigation of space which departs as the first construction of the idea of the void. The rapport between art and space is clearly tied to the void. In three completely different ways, the artists place an emphasis on the relationship between the void and the absurd, the public and the intimate. In a certain way, the works of these artists seek to create a dialogue through the use of the void.

Portal is the new pavilion model designed for the exhibition by Dan Graham. The concepts of space and passage are principle elements of a research that the American artist has pursued for many years. The void of the architecture is confirmed by the transparency of the material. The utopian game that the pavilions develop is based on the dualism of transparency and reflection. To be observed, to observe, and to observe oneself intertwine in a continuous construction of infinite combinations with respect to the space.

In addition to the model of the pavilion, Graham also presents two videos: Lax / Relax, a video taken from a 1969 performance, and Performances and Stage-Set Utilizing Two-Way Mirror and Video Time Delay, made together with Glenn Branca. Both videos are characterised by the sonorous element: the first connects the recorded voice with that of the artist, while the second plays with the rapport between the public and the stage.

In the work In Concert Gert Robijns presents memory described through objects. The result seems to be that of a quotidian catastrophe, a game that often occurs in the installations of the Belgian artist in which the mélange of fun and tragedy creates an enjoyable tragicomic grammar. The use of a domestic vocabulary is frequent in Robijns‘ work; kitchen objects or items of everyday use create that mimetic passage in which the poetics of the artist emerge with force. The line of an imaginary flooding is confirmed by the residue of the water that remains in the containers. The moment described by the artist is successive to the event, the passage of the “flood” has already passed, that which remains is the result of an event that one must attempt to explain. The act of seeking is a constant in the work of Robijns and often compels the visitor to find the limits between the work and the rest of the space.

The void is directly connected to the body in the work of Donatella Spaziani. Her sculptures, casts of the busts of various people covered in calfskin, create the void as the remains of the invisible sculpture. The subject is the void that comes out of the container. Grammatiche fossili, its title taken from a poem by Valentino Zeichen, emphasises the duality of the body, on the one hand light and invisible, on the other hand at a stand still and immobile. An absurd attempt to describe the invisible, by immobilising it. These sculptures directly refer to the photographs that Spaziani has taken for several years and which depict the artist herself in an intimate environment. The photographs are taken with a self-timer, thus underlining the value of the immobility of the image of the body.

Through the void, the sculpture reconstructs the figure itself by carving out a niche of space. That invisible image becomes the confirmation of the existence of the figure. A second work in the exhibition presents a life-size silhouette of the artist drawn in pencil. Here again, Spaziani demonstrates the strong relationship that exists between the body and the void.