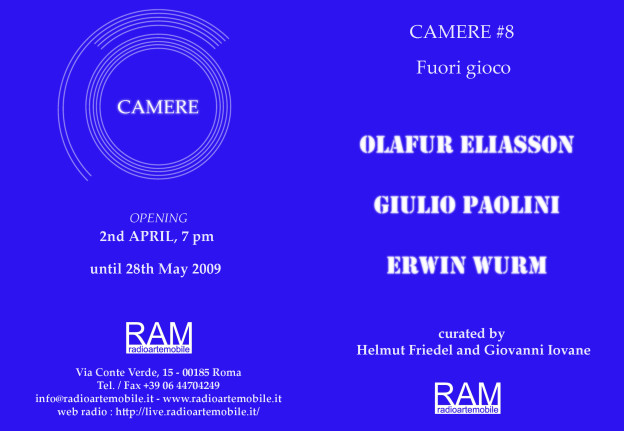 Helmut Friedel is the curator, alongside Giovanni Iovane, of the eighth edition of the CAMERE project at the RAM radioartemobile gallery in Rome. Helmut Friedel is currently the Director of the Lenbachhaus Museum in Munich. He has published a great amount of monographs dedicated to artists like Kandinsky (2008) or Gerhard Richter: Red, Yellow, Blue (2007). Moreover he has recently curated important exhibitions including Franz Marc: The Retrospective (Munich, 2005). Giovanni Iovane, independent curator and professor of History of Contemporary Art in Brera. Guest curator at the Lenbachhaus in Munich and at the Cantonale Art Museum in Lugano, he co-wrote with Filipa Ramos Oggetti smarriti. Crisi della memoria nell’arte contemporanea (Lost Property. The crisis of Memory in Contemporary Art), Silvana ed. Milan, 2009.

Olafur Eliasson, the Danish artist born in Copenaghen in 1967, studied at the Royal Academy of Fine Art. His work consists of installations which are usually conceived as specific spaces, both indoor and outdoor, in a limited period of time. In fact, these works are not often meant to be part of an exhibition given their brief existence. They cannot be preserved and they survive only through images or words. Eliasson uses natural elements – fire, water or wood – as his basis. Often these are used to recreate an external environment or natural phenomena (waterfalls, rainbows, the sun) within an indoor space. Since the beginning of the nineties Eliasson began to display his work to the public and take part in important exhibitions (among others he is famous for his piece in the Turbine Hall in the Tate Modern in London – the installation The Weather Project in 2003). More recently, of note are his shows at the Moma, New York (2008) and at the Kunstmuseum in Basel (2008).

Giulio Paolini (Genoa, 1940). Often associated with Arte Povera (Poor Art), Paolini’s work is distinguished by rigorous conceptual study, defined yet obviously not concluded, ever since his first piece in 1960, Disegno geometrico (Geometric Design). Since this first reflection on the space of representation and on the statute of the work of art, Paolini has developed complex research both on the instruments of artistic creation and on the figure of the author; the author as accomplice alongside language and the spectator. Among the principal characteristics of his operative method are quotations, duplication and fragmentation, employed as expedients for staging the distance from the completed model and for turning the piece into a “theatre of evocation”. Paolini has exhibited both in important galleries and in numerous international museums. He has taken part in the Venice Biennale on several occasions as well as the Documenta Kassel. Among his recent personal exhibitions are those at the Fondazione Prada (Milan 2003), the Kunstmuseum, Winterthur (2005) and the GAMEC in Bergamo (2006).

Erwin Wurm (Bruck an der Mur, 1954) is an Austrian artist who lives and works between New York and Vienna. Since 2002 he has taught at the University of Applied Arts in the Austrian Capital. Other than his most recent Fat Sculptures which overturn these parameters (volume, weight, gravity, stability and equilibrium) previously, at the end of the eighties he had already developed his One Minute Sculpture. These can be considered ephemeral performances yet at the same time material works, which on one hand take place in a brief period of time before coming to an end, yet on the other the endure through the photograph or the recording. Wurm himself or the spectator can be involved within these manifestations which juxtapose unusual actions with everyday objects. “I am interested in everyday life. All the materials that surrounded me could be useful, as well as the objects, topics involved in contemporary society. My work speaks about the whole entity of a human being” the artist declares. Among his most important exhibitions are his personal shows at the MOCA in Lyon (2007), the MACRO in Rome (2006), the Palais de Tokyo in Paris (2002), the Drawing Centre in New York (2001) and the MAMCO in Ginevra (2001). He also took part in the collection, Games. Kunst und Politik der Spiele at the Kunsthalle, Vienna (2008), Tempo at the MOMA in New York (2002) and the 49th Venice Biennale(2001).