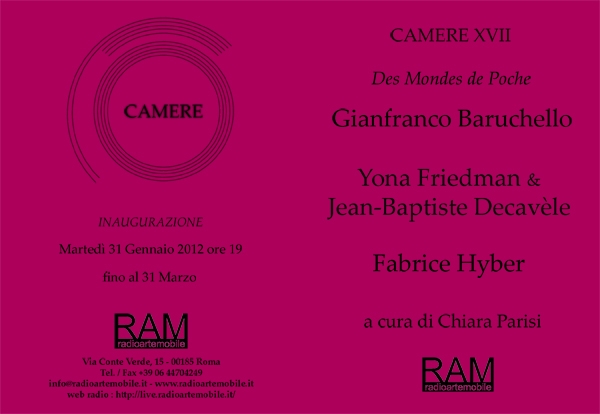 Gianfranco Baruchello, Yona Friedman & Jean-Baptiste Decavèle and Fabrice Hyber are invited to the spaces at RAM radioartemobile to participate in the 17th edition of CAMERE.

Des Mondes de Poche is a project that was born from a series of encounters in the apartments of Rome and Paris based on the concept of sharing and communication.

The system of Camere is a representation of the communicative process that makes it possible to share reality and truth. Gianfranco Baruchello has created Psicogim, a real gymnasium for the mind, rejecting the dualism between reality and unreality; it opens up to tendency and propensity. A dual communication, an act aimed at interaction with oneself: ideas are traced along the perimeters of the mind, inside and out.

The work by the duo Yona Friedman and Jean-Baptiste Decavèle is constituted by a constellation of architectural inventions, photographic or video creations that are grafted onto a utopian and visionary universe. Apart from their common production, the two artists are bound by a profound friendship and creative adventure that takes shape on the fictitious island of Balkis.

Fabrice Hyber’s intervention offers the visitor the possibility of being immersed into his universe in which the original function of a great deal of familiar objects borrowed from everyday life alternate. His proposal is developed around the presentation of POF (Functioning Object Prototype) with a multitude of drawings.

The critical text of the exhibition Des Monde de Poche is written by Chiara Parisi, Director of cultural programs of the Monnaie de Paris.

Preceding the opening of the Camere XVII will be the round table D/A/C PRODUCERS vs ARTISTS January 30th 2012 at 6 pm at the Hotel Hassler in Piazza di Trinità dei Monti, 6 Rome. Artists will meet representatives of the industrial world in order to identify a DENOMINAZIONEARTISTICACONDIVISA.

The encounter will be broadcast on RAM LIVE, http://live.radioartemobile.it/, RAM’s web radio.