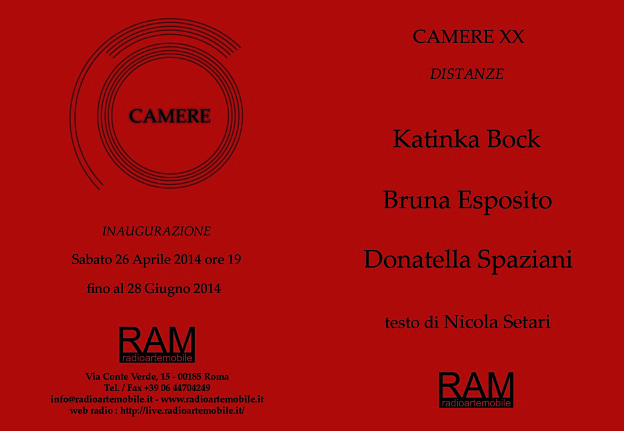 Katinka Bock, Bruna Esposito and Donatella Spaziani in RAM radioartemobile’s CAMERE recreate, each in their own modality, a dimension that, while recognising the distance with the exterior and the public, concentrates on the interior and the private.
The works are all permeated by that intimate essence found inside homes, in those everyday inhabited spaces that assert the value of continuous dialogue between two worlds.

The installations Gurdulù e Montizùl, Dichte (Thickness) and Sculpture in the Tree by Katinka Bock fill the room, not only by occupying the floor and walls but also by interacting with the exterior. The tree of one of the titles is indeed none other than the one that can be glimpsed through the window of her room, in the tight relationship that unites places that are far from unfamiliar eyes and the unfamiliar that enters and becomes part of everyday moments.

Donatella Spaziani starts out “from the room to then build a new universe, in which elements of domestic use are transformed, taking on a new valence”. From a corner of the room, an almost human form is created, made up of 50s porcelain dishes broken following quite precise lines. The artist presents another two historical installations. The artwork by Donatella Spaziani is all moved towards the interior, highlighting the intimacy and delicacy that is typical of her work.

The text accompanying the exhibition Distanze (Distances) is by Nicola Setari who is present, alongside the three artists, at the round table inspired by his text that take place on Sunday 27th April at 11.00 at the offices of RAM radioartemobile. Other participants are Eva Wittocx, Chief Curator of the Leuven Museum, Kathleen Rahn, Director of the Kunstverein in Hannover, Lorenzo Benedetti, Director of the De Appel Arts Centre in Amsterdam, as well as Dario D’Aronco of the Jan Van Eyck Academy in Maastricht via telephone.
Moderator Marika Rizzo.
The meeting is available on the sound archive of RAM.

With thanks to Maurizio Rizzuto and the Galerie Jocelyn Wolff in Paris.