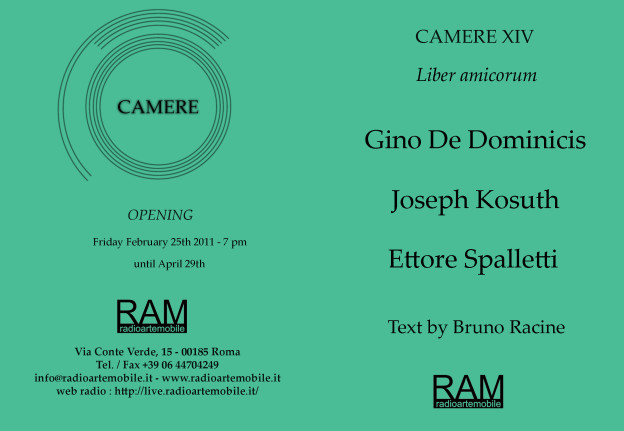 The Liber amicorum, the title of the text by Bruno Racine written for the 14th edition of CAMERE, is like a page of a private nature. Within are the names of Gino De Dominicis, Joseph Kosuth and Ettore Spalletti, artists of the international scene who, despite not belonging to a common artistic current, have been bonded since the 70s by a profound friendship.

Gino De Dominicis will offer his “mute vicinity” with one of the sculptures presented at the Pieroni Gallery in 1979 (11 Statues) In Movement. The statue in question comes to life through the posing of a straw hat, suspended mid-air as if it were levitating, along with a pair of booties, these too made of straw, underlining the lightless and transparency of a materiality which the traditional sculpture, instead, possesses.

Joseph Kosuth will present two works. One, a work on glass from 2006 is the construction of a paradox—it is comprised of the repetition of two paragraphs, one becoming a reflection on the other. The second work, in warm white neon, is from 2009 and is constructed from a fragment of the novel Finnegan’s Wake, by James Joyce.

Ettore Spalletti, in the third room, re-proposes a piece from 1979 previously exhibited in the Pieroni Gallery in Rome. With the Colonna (Column), the artist expresses a thought of circularity and of dematerialization. Around it are the artist’s first impasto of color works on canvas (1974 – 1975), all previously unexhibited.

A special thanks to the Gallery Lia Rumma.