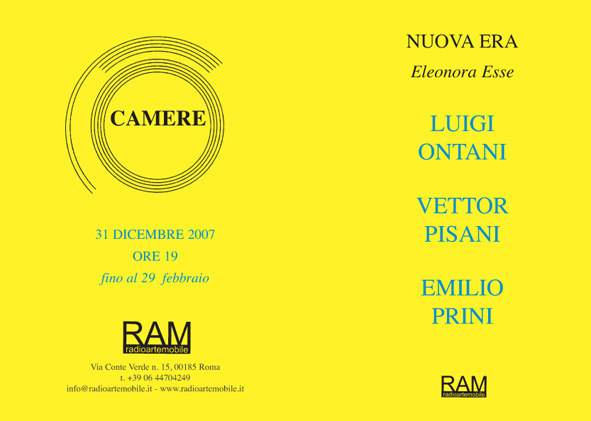 On Monday, December 31st, the exhibition CAMERE V  opened at RAM radioartemobile.
The exhibition, organised in the ambit of the CAMERE project – now in its fifth instalment –, proposes the work of Luigi Ontani, Vettor Pisani and Emilio Prini.
With his characteristic ability of reworking different structures and languages with surprising imagination, Luigi Ontani presents the triptych RagoRugaRogo. The work is rich in symbolism and capable of interpreting with world with irony, and of expanding the horizons of a reality often forced by the obligations of conventional order.
Always poised between art and critical quotation, Vettor Pisani presents an installation that offers, with intelligent and necessary irony, a rich mixture of symbolism, alchemy, iconography, and content that do not present solutions of continuity between past and present.
Emilio Prini, an early protagonist of the Arte Povera movement and advocate of an artistic disposition which is no longer creative (“nothing is invented”) but inquiring (“one discovers everything”), reconfirms his faith to material, which he recombines through variation.
Different visions but able to coexist in a common platform that opens a cultural dialogue, and to which is also added the highly personal reflection of Eleonora Esse, which accompanies the exhibition with the new text Nuova Era [New Era].